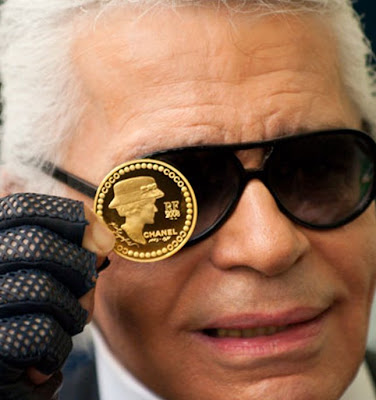 "There might be less of it, but money can still be beautiful,”
Karl Lagerfeld is the most respected man in fashion, no denying that. He has been at the helm of two/3 of the world's biggest labels Chanel & Fendi, yet despite what you may think KL has never made any money. Until now that is...
To celebrate the 125th anniversary of Gabrielle Chanel’s birth, Karl Lagerfeld was given the keys to the mint. Mr.Lagerfeld successfully designed two gold and two silver coins to make up the limited edition collection. Each coin features Chanel’s portrait on one side and number 5 on the other representing the coins face value + Channy's much loved perfume. If you do the maths Chanel just printed $AU110 155.62. Dec 1 will mark the day the 11099 K.L. designed coins will enter circulation, however don't expect to pull any of these babies out of a vending machine at your local train station, they're all being sold off individually with the RRPs starting at $AU90 and reaching as far up as $AU11700! That's a mark up of nearly 1170 times!
Finally Karl can officially brag about having the license to print money! Crazy huh? 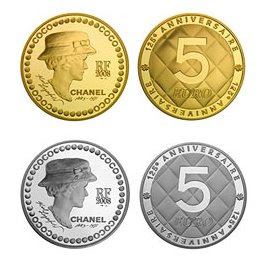 Also i am selling a ALICE MCCALL limited edition surfboard on ebay! Only 2 were made so its an extremely rare item! It was featured in Australian Marie Claires 150th issue in Feb 08 for the Sun Safe awareness where 17 Australian Designers came together to produce one off items. There is a little pic below for you and the link is here

hahaha!!!love it:)
chanel should build its own republic too:)

hihi I didn't know... that's kinda crazy. Anyways I love your blog, it's sooo much fun to read.